Lessons about Classical Music for Children

In 2009, Lauren and Mark Arnest with Thomas Wilson, associate conductor of the Colorado Springs Philharmonic Orchestra, and Gloria Slayton, an educator with over thirty years’ experience teaching music and other subjects to elementary school children, conceived of a series of small plays with orchestral accompaniment to teach children about classical music. The lessons revolve around a magical character named Uncle Wilbur who somehow lives inside an old piano that has come into the possession of the protagonists’ family. The three siblings (in the initial series a girl of eleven, a boy of nine, and a girl of six) have separate age-appropriate adventures with Uncle Wilbur, whom they have kept a secret from their parents. Each of the children has discovered that if they correctly play the notes of music that appears in the piano bench, they can summon Uncle Wilbur out of the piano. He then leads them in an adventure with the symphony orchestra, which also magically appears in their living room. The full series of Uncle Wilbur shows is contemplated to comprise nine separate episodes, three for each age group of five- through seven-year-olds, eight- through ten-year-olds, and eleven through thirteen-year-olds. 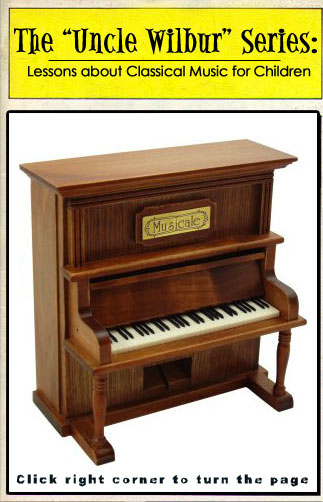