My father, Bernard Arnest (1917-1986) was a notable painter in his lifetime: a student of Boardman Robinson at the Broadmoor Art Academy and later at the Fine Arts Center, a student of Henry Varnum Poor, youthful winner of a Guggenheim fellowship, war artist for the U.S. Army, and teacher at the University of Minnesota and later at Colorado College, where he was long-time art department head. His reputation has waned in the years since his death, largely due to family inertia, but with the recent passing of his wife, Barbara Arnest, his heirs are determined to make his work more visible to the public.

And so I’m happy to announce the creation of a facebook page devoted to his art: The Artwork of Bernard Arnest. My father had the misfortune of being sincerely eclectic, so it is difficult to characterize his painting; but if you take a few minutes to look at the site’s images, I believe you will be pleasantly surprised. 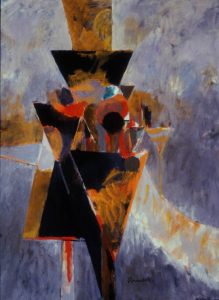